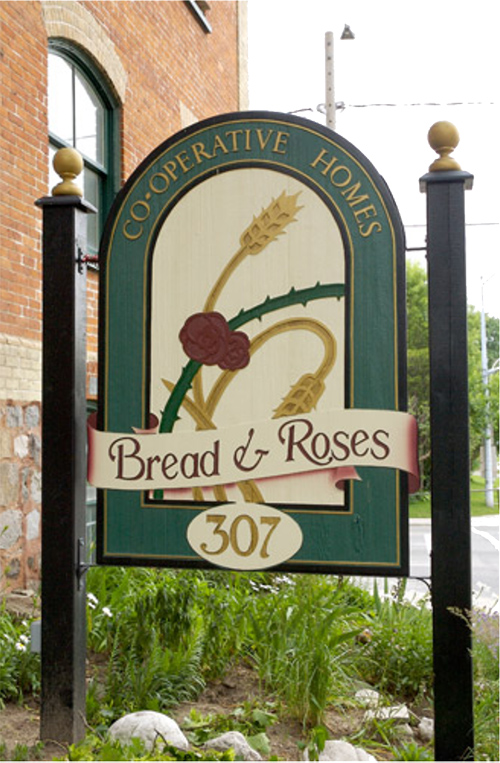 Bread and Roses Co-operative Homes is a non-profit housing co-operative located in downtown Kitchener. We have 66 apartments located within the two buildings. The heritage building, which was built in 1879, has 21 apartments, and the six-storey highrise (with an elevator) has the remaining 45. The co-op began operations in 1990.

At Bread and Roses our goal is to provide safe, affordable housing that is located on the edge of the downtown core. Our membership is diverse, and is made up of seniors, young families, couples and singles. We offer a sense of community where members can share their talents and skills with each other and the co-op.

The co-op operates according to the co-operative principles. We value democratic control, through regular General Meetings (to hold elections, approve the Budget, pass Bylaws, appoint the co-op’s Auditor, and approve Audited Financial Statements) and the election of an eight-member Board of Directors.

Members help to make decisions about what happens in the co-op, and they are encouraged to be involved in co-op life through joining one or more committees or helping with tasks.

The heritage building was built in 1879 by Emil Vogelsang as a button factory. The factory was called the Canadian Ivory Button Works, and was the last of 4 button factories built by Mr. Vogelsang. In 1884 the factory was taken over by the shirt manufacturers, Greene and Rome. They built an addition to the original structure in 1893. The building was used as a barracks during WW 1, and was sold to the Rumpel Felt Company in 1919, who built the third structure. Over the years, other industries occupied the building, including a mattress factory and an electrical supply company, MacDonald Westburne Electric.

The buildings feature many unique architectural features, such as the different coloured brickwork, a field-stone foundation, segmentally arched windows and different roof lines.

The History Behind The Name

Bread and Roses acquired its name from a union song that was written and sung by textile workers in the 1920’s. These workers, mostly women, toiled in unsafe and unhealthy conditions in the textile factories in the United States. The song, Bread and Roses, was composed to support their struggle for better wages and working conditions. The song contains a phrase “hearts starve as well as bodies; give us bread, but give us roses!” This phrase was the initial inspiration of the founding Board of Directors whose vision created the co-op in the late 1980’s. The heritage building is closely connected with the textile industry in Kitchener, and the working conditions would have been fairly similar to those experienced in the United States. The founding board recognized that people needed affordable housing (the bread) as well as community and beauty (the roses).

The co-op operates according to the co-operative principles. We value democratic control, through regular General Meetings (to hold elections, approve the Budget, pass Bylaws, appoint the co-op’s Auditor, and approve Audited Financial Statements) and the election of an eight-member Board of Directors.

Members help to make decisions about what happens in the co-op, and they are encouraged to be involved in co-op life through joining one or more committees or helping with tasks.

Members of the co-op decided in 2017 to make the co-op non-smoking. With the exception of one designated outdoor smoking area (a covered gazebo), smoking of any substance is prohibited

These guiding principles govern decision making at Bread and Roses and are all equally important.

The co-op is close to many downtown amenities. It is a 5-minute walk (in opposite directions) from both the Queen Street Ion Stop (on Charles Street) and the Iron Horse Trail. There are three bus routes that stop in front of the co-op.

The co-op is a block away from Victoria Park, the city’s largest green space, which includes a large playground and splash pad (and a rink in the winter). Victoria Park is also host to many festivals, including the Multicultural Festival, Tri-Pride, Kultrun, the Festival of Lights and Word on the Street. The Kitchener Public Library, the Kitchener Market, Kitchener City Hall, Joseph Schneider Haus, the Kitchener-Waterloo Art Gallery, and The Museum are all within a short walk.

- We offer safe and affordable housing to our members.

- We govern our decision making by the co-operative principles.

- We manage our finances and resources carefully.

- We are concerned about our impact on the environment and will make decisions to minimize our environmental footprint whenever possible.

- We are a diverse community.

- We treat each other with respect.

- We work together to promote community life within the co-op.

- We promote collective responsibility for the well-being of the co-op and encourage members to share their time and skills for the co-op’s benefit.

- We share a responsibility for the well-being of the larger community.